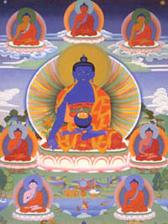 In Tibet the Medicine Buddha is revered as the source of the healing arts for it is through him that the teachings embodied in the Four Medical Tantras, the basis of Tibetan medicine, came into being.

The Buddhist view holds that everything within the universe is in a constant state of flux, that all phenomena are characterized by impermanence, and that their only permanent feature is impermanence. It is this very impermanence of creation that causes every being, at one stage or another, to suffer.

The Buddha traced the root cause of all suffering to Ignorance, which obscures our mind from understanding the Reality of Phenomena. This gives rise to the “three poisons” of attachment, hatred and delusion. According to the Four Tantras, the fundamental cause of every disease is to be found in these three poisonous delusions which give rise to imbalances in three subtle humors of Baekan, Loong and Tripa (phlegm, wind and bile). Along with these, the four contributing circumstances of time, spirits, food and behavior cause the humors to increase and decrease. The imbalance then spreads over the skin, increases in the flesh, moves along the vessels, meets the bones and descends upon the solid and hollow organs.

Treatment of disease and the maintenance of health are therefore primarily a matter of bringing the various elements of the body back into balance and this is accomplished through four progressive types of treatment. The first two involve changes in the type of food we eat and behavior we engage in. Only when these prove ineffective is the physician advised to prescribe medicine and only when this also fails is he or she to resort to external forms of treatment such as cauterization and the like. However, none of these types of treatment will have a lasting effect unless they are accompanied by spiritual transformation. If ignorance and its associated delusions remain festering inside, sooner or later they will give rise to disease and the recurring miseries of cyclic existence. Thus Buddhas such as Shakyamuni and the Lapis Healing Master are referred to as great physicians because they have the compassion, wisdom and skillful means to diagnose and treat the root delusions underlying all mental and physical malaise.